You are here: Home » Blog » News » The practise of appeasing one’s protective deities is strong and deep-rooted 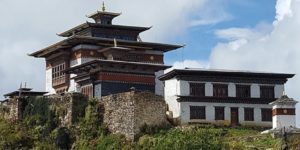 Huffing and puffing, five men are atop a steep climb. It is 6:30 am. They have to get into the shades of the coniferous forest before the hot autumn sun reaches them.

The men are on an important mission. They are on their way to appease their “protective deities.” They do it every year. The belief is strong and has been passed down for generations. The safety of the family, the success of the year, including crop yield, depend on how appeased their protectors are.

The ritual begins at the end of a dirt road. There is a ruin of what appears like a two-storey traditional house. A new lhakhang and a choeten were built nearby recently. The men get quickly to the task. One gets the saang ready. Others open the trekking bags, taking out oily bangthras (big containers made from cane). Inside the bangthras are rice and meat, lots of them, compartmentalised by banana leaves.

They take out the rice and arrange it on the flat space of the choeten. On top of the rice are placed pieces of sikam and shakam. Fruits are cut into halves and placed alongside. The bigger share is for the King. The other two are for his servants (their protector and his courtiers, it seems).

They prostrate muttering words of invocation to the deities, calling them by their post:

“We’’ve come again to offer you the freshest of the fresh,

The youngest, a student, hardly utters a word as he hesitantly prostrates. He offers a Nu 10 note and continues fiddling with his earphones. Two stray dogs have come without invitation. A crow is circling above the choeten.

“It’s a good sign,” says the eldest in the group, Gupdrep (former gup) Thanka. They chase the dogs and wait for the crow to come and eat the offerings. 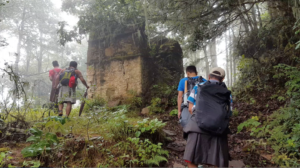 But there is no time to wait and see who gets to the food first, the dogs or the crow. The journey has just begun. At 3,370 metres sits Nyenchen Dongkola, founded by Terton Tshering Dorji. The monastery is revered for the protective deity, Dongko Tsen.

It’s an eight-hour uphill climb. Judging from the pace, it is going to take longer.

The men make their presence in the woods felt. They shout on top of their voice to chase away bears and boars. The area has plenty of Himalayan Black bears. The broken oak branches or freshly dug up ground confirms their presence.

The next place of offering is at Goensakha, five hours climb from the road head. There is plenty of time and the men get talking. They talk of almost everything – from local government elections to politics to North Korea and changes in the surrounding areas.

Exhausted from the climb, they wish the road that heads to a mining site was on their side of the hill. A chopper flies above them and one quickly remarks if their sons or their sons would be using choppers to do what they are doing.

At 11am, they reach Goensakha. Goensakha is in ruins. There could have been a massive lhakhang long ago. The old peach and pear trees indicate that Goensakha had once been a thriving village. Below the ruins of the lhakhang are ruins of three houses.

The lhakhang and the houses were razed to the ground by a forest fire. When exactly that happened is not known. Gupdrep Thanka recalls what his late father said. “The caretaker was not home. While he was waiting for people to come and  save the lhakhang, the fire had engulfed the entire structure.”

Goensakha is important for the group of men. They repeat the process of offering food and calling on to the deities. Here again, they have the King and his courtiers. They speak out the names as they lay out the food. One is called Dambow- nobody knows who Dambow is. Their parents had been doing it. “It is the nyep (host),” says one.

As the climb ascends after lunch, they leave behind the coniferous forest and reach the alpine zone. The path is overgrown with grass and thickets. The men in the front pulls out his dozum (dagger) and slashes the overgrowth, blaming the 2015 forest fire that cleared the dry thickets and led to a thicker regeneration.

The weight gets lighter after lunch. The next place of offering is Tsengyeding, two hours uphill from Goensakha. It is 1pm.

At the site of offering, flat stone slabs are placed as a makeshift altar. Two projected slabs serve as table for offering. They sweep clean the rice on the slab offered by others ahead of them. The men repeat the process. They prostrate in supplication in front of the slab chanting liturgies to Ap Dongko Tsen, the protective deity of Dongkola.

Dongkola is a steep climb from Tsengyeding. It takes two more hours. The monastery founded by the speech incarnation of Terton (treasure revealer) Pema Lingpa stands on the highest peak that separates the Wang and Paro valley.

The Tsen, a wrathful figure, it is said, is not open to public viewing. The men join a dozen people from Wang and Paro valley who had come to appease the Tsen. They have brought fresh harvest, meat, fruits, butter and tshogs. Some had driven up to Dongkola from the Paro side of the hill.

Why do they do what they do?

Historian Dr Karma Phuntsho says that Koncho Choeni or Koncho Soleni, like the Lochoe ritual, is a tradition of making seasonal offering to the tutelary deities. Koncho in the context of Koncho Choeni refers to the protector deities and not so much to the Three Jewels of Buddhism.

The deities like the group of men are on to appease, he says are often clan, family or local territorial deities.  “Bhutanese families believe in the power of these deities to affect the welfare of the humans. They are located in or associated with certain power spots or landmarks such as cliffs, trees, rocks, forests and rivers, which are often considered their citadel or residence,” says Dr Karma.

“Both in the Pre-Buddhist and Buddhist worldviews, these gods play a major role in human wellbeing and prosperity. The traditional Bhutanese life was a constant negotiation with such forces of nature which fill the environment alongside the visible forms of life such as humans, insects, animals and birds.”

Anim (Nun) Kinzang Pem remembers visiting Dongkola every year since she was a small girl. Her parents couldn’t have children and sought help of Dongko Tsen. Kinzang Pem, the only child, survived.

It is important to propitiate the family’s tutelary deities, says Kinzang Pem. The 56-year-old nun was with her son at Dongkola. Kinzang believes that if the deities are not appeased, it could bring misfortune in the family. “They are the worldly gods that protect us when we are alive. Not after our death,” she says.

Confirming her fear, Dr Karma Phuntsho says that the deities are also considered to be worldly protectors who have a sense of expectation and fear and it is considered important to make timely offering. “If seasonal offerings are missed, they show their dissatisfaction and annoyance through inclement weather, epidemics or some other natural calamity.”

Gupdrep Thanka says that Kencho Soelni is an integral family ritual. “It is a practice that has to be carried on,” he says. “We are driven by strong belief systems and when it is broken, every misfortune or ill luck is associated to it.” The former gup experienced instances in the past when things didn’t go the way they wanted and after consulting astrologers (tsips) they pointed out lapses in the practice.

“In real sense, doing it on time and doing it the right way gives us positive energy and confidence.”

Tired and bored, the youngest in the group, Kinley Tenzin, a class IX student asks why the Tsen cannot be appeased from the comforts of home. It is Kinley’s second year to Dongkola. He will take the responsibility from his civil servant father when he becomes old or if he is transferred. Today, they come from Wangdue and time it on weekends with other villagers.

There are others who need not trek to Dongkola and do it from their house. “Our father and their fathers had been doing it, so we cannot compromise,” says Yeshey the father. For now, his son feels that it is a huge responsibility to continue the practice. “It is only once a year besides the trek is fun,” says Kinley.

Gupdrep Thanka is confident that the practice will continue. “My sons will do it and their sons will do it because our lives are guided by our strong, deep-rooted beliefs.”

Penjor has climbed up to Dongkola numerous times in the past. “I will do it as long as my legs can carry me. But when my two-year old son is strong enough to walk, he will follow my footsteps,” he says. “Probably there will be road from this side of the hill. Maybe my son would be using a mountain bike!”