Their Majesties offer prayers at Taktsang

You are here: Home » Blog » News » Their Majesties offer prayers at Taktsang 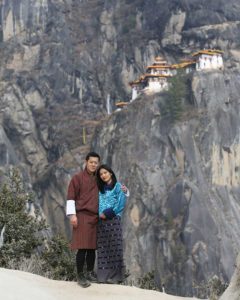 Considered one of the most sacred Buddhist sites in the country, the temple complex surrounding the scared cave where Guru Rinpoche meditated in the 8th century, has been built by various Buddhist masters over the centuries.

Later in the evening, His Majesty celebrated the special day at the Royal Bhutan Army’s Commando Wing in ParoShabha with the soldiers and officers, who are the part of Bhutan’s first ever contingent for the United Nations peace keeping operations. Bhutan’s contingent is at a “Rapid Deployment Level” which means the unit is now ready to be deployed to a mission area within 60 days of deployment notice from the UN.

Bhutan has been participating in UN peacekeeping operations since 2014, and over 82 peacekeepers have successfully served at various UN missions around the world. Retired Armed Forces personnel, and DeSuups of Paro also joined in the intimate celebration.