Thimphu’s Memorial Choeten- The symbol of peace and prosperity

You are here: Home » Blog » News » Thimphu’s Memorial Choeten- The symbol of peace and prosperity 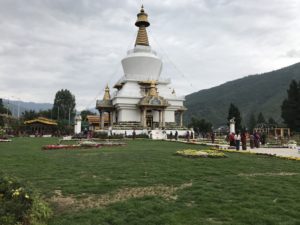 The Third King, Jigme Dorji Wangchuck (1928-1972) wanted to build a monument to, “represent peace and prosperity in this war-ridden world.” After consulting with Dudjom Rinpoche Jigdrel Yeshi Dorji (1904-1987) he chose to build a Dudul Yuley Namgyal choeten in the heart of Thimphu.

The late King’s mother Gyalyum Phuntsho Choeden Wangchuck (1911-2003) stepped in to fulfill her son’s wish. Late Gyalyum ordered the construction of the choeten and became its chief patron. Gyalyum Ashi Kesang Choeden Wangchuck, her two daughters, their Royal Highnesses Princess Sonam C Wangchuck and Dechan W Wangchuck, and the government supported Gyalyum in the endeavor. In 1972, “the 37th session of the National Assembly passed a unanimous resolution to proceed with the construction of the choeten.”

Two years later, in record time, the choeten was completed and consecrated during the second death anniversary of the Third King. It was “dedicated to the late King’s memory and to peace.”

The choeten now popularly known, as the memorial choeten was a part of our late King’s grand master plan. The late King affectionately referred to as Zhingpheb wanted to commemorate Buddha in the traditional three-fold Buddhist classification of ku (body) sung (speech) and thu (mind).

Zhingpheb had, “vowed to undertake various acts of merit for the benefit of all sentient creatures.”As a representation of the ku, he built 10,000-gilded bronze image of the Buddha. These beautiful statues are still housed in the throne room of the Tashichhodzong in Thimphu.

To commemorate the sung, Zhingpheb commissioned a set of Kanjur to be calligraphed in gold on deep blue paper. Since the early 1980s till date, the Fourth Druk Gyalpo has sponsored the reading of it in memory the beloved Zhingpheb. The Kanjur is the translated words of Buddha consisting of 108 volumes.

Every choeten (chaitya/stupa) is regarded as the receptacle of the mind or the thu. “It was His Majesty’s intention to construct a magnificent stupa comparable to the physical and verbal representations. His sudden and tragic death, however left this act incomplete.”

The origin of choeten is as old as Buddha. According to Buddhist literature, while on his deathbed at Kushinagara, Buddha himself suggested to erect stupas on his mortal remains. In keeping with his wishes, 10 stupas were built. This included the two built over the urn and embers to enshrine the corporeal relics.

These 10 stupas became the symbol of the Buddha and remained so for a long time as the sole object of worship before idols of Buddha were made.

Dudjom Rinpoche was the architect of the memorial choeten. The design followed the traditional architecture but had some modern religious elements to it.

Bhutanese artisans built the structure. The Home Minister, lyonpo Tamji Jagar was the chief supervisor and closely associated with the construction since its inception. The Drukpa Kagyu master Je Thrizur Tenzin Dhendup (b.1925) who later became the 68th Je Khenpo was the Zung Lopen at that time and responsible for the installation of all relics.

The hand chiseled stone structure covers an area of 3,600 square feet. The choeten is unique and probably the only one of its kind in the world. The height of the three-storied structure is “107 feet” at its apex.

The choeten’s shape is typically that of a Buddhist stupa. It has several inner chapels dedicated to various deities. Each storey houses a huge shrine in which thousands of butter lamps flicker continuously.

The exterior construction is a classical stupa. The basic interior structure contains three essential levels. “The lowest represents the Vajrakila teachings of the Namchak Putri revelations of Dudjom Lingpa.” On the ground floor, is the Phurba (kilaya) chapel with more than hundred statues. There are exquisite wall paintings of the Mahakala (Shungmai Lhatshog). At the base of the choeten, there is a small lhakhang dedicated to Guru Ghhenjey.

On the first floor, there is a Kagye Lhatshog lhakhang. It has some statues that give added attraction to the choeten. Around it, the wall paintings are known to be those of the Tsachum and the 25 disciples of Guru Rinpoche.

The second level is adorned with the Kagyed Deshek Dupa teachings rediscovered by Ngadak Nyangral Nyima Oser. The chapel of Gongdu Lhatshog has been installed on the second floor. Statues and paintings of the sacred shrines of Lhagyud and Shithro Lhatshog adorn it. A statue of Buddha sits in meditation position on the second floor facing east. In Bhutanese architecture, the main face is always the east.

The highest level enshrines the Lama Gongdu teachings of Terton Sangye Lingpa. The tiny chapel at the top of the shrine contains the representations of the eight aspects of the Guru Rinpoche known as the Guru Tshan Gye.

The choeten is crowned by a serto, or gold pinnacle symbolising it as a sacred national monument.

The choeten has four large terraces. There are four porticos, which are supported by two pairs of columns and capped by crescent moon and the sun. Like most big monasteries, the memorial choeten also has statues of the four guardian kings above the entrances.

Depicted sitting and dressed in ornate armor the guardian kings have distinct colors and various tools. For example, the guardian deity of the east is Yulhorsung (Skt: Dhritarashtra) , white in colour and with a lute in his hand.

On the periphery of the choeten, there are four 10 feet columns at each corner. Like the Indian Ashok Sthambh, these columns are topped with the sculpture of an animal. The snow lions are chained to the stupa. The popular belief is that these mythical snow lions hold the choeten from flying away. In Buddhism the snow lions, “symbolises the spontaneous, energised and blissful nature of the enlightened mind and embodies the quality of the joyful fearfulness.”

Another icon is the statue of the goddess of offering (Chhopai Lhamo) which is strategically placed at the entrance. The divine lady has a water vessel in her hand and used to provide holy water for visiting devotees.

Thirty-four years after the memorial choeten was consecrated, it was once again consecrated in 2008 after major renovations. Some features were added to it. It now spans an area of, “68, 781.38 sq. feet,” in the heart of Thimphu and dominates the skyline.

Today the Dudul Yuley Namgyal Chorten is not only a symbol of peace and prosperity of our nation but serves as a memorial to our beloved Zhingpheb.