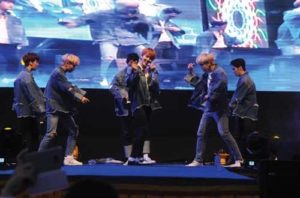 The fans poured in thousands at the Changlimithang stadium in Thimphu hours before the first ever K-pop concert began.

Scorching mid-day sun and drizzle in the evening did now deter the crowd. Nor the disappointment over the cancellation of four bands that had confirmed to perform earlier.

It was a long wait because the set was yet to be completed. Technicians were fixing connections to microphones, sound systems, and lights in haste as show managers came barking about, pointing at their watches. The show was delayed by more than an hour.

“How can we do such a huge set up as this within a few hours?” asked a local technician.

Blame was to blame, alas! It rained in the morning, which stopped workers from carrying out the final preparations.

The show began at long last with local bands. The first performance was a Bhutanese tradition song, Jogay Jogay Charo Tshu, a light fusion of traditional and the modern. Then came on The Buds, Idiocracy, Shaw, and Singye, performing some covers and their original songs.

The crowd asked for K-Pop. The stands were taken. The rows in front of the stage were mostly filled by youth. Most of them had come leaving behind preparations for their mid-term examinations. They had waited for hours at the Tourism Council of Bhutan office for free tickets to the show. In less than two days, the organisers distributed more than 10,000 tickets.

Five K–pop bands – Double Eight, Badkiz, Seven O’clok, Steller, Classy and Fresh Boyz enthralled the audience to the full even through Park Jea-Sang, popularly known as PSY, pulled out at the last moment.

The artists greeted in Dzongkha and Korean. The crowd went bererk.

A small gathering of youth was waiting patiently at the exit to catch a glimpse of the stars.

Many fans, especially the youth, jumped to PSY’s defence on the social media when he was mocked for pulling out of the concert.

As part of the celebrations of 30 years of diplomatic relations between Bhutan and the Republic of Korea, another free concert will be hosted in Thimphu in September.

The organiser from Korea apologised for PSY’s no show and assured that they would make every effort to bring him to the country next time.

Diplomatic relations between Bhutan and the Republic of Korea (RoK) was established on September 24, 1987.