You are here: Home » Blog » News » Timber extraction, a threat to Rufous-necked hornbill 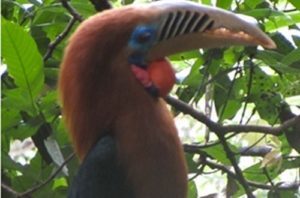 Rufous-necked hornbill (aceros nipalensis) can tolerate or survive certain degree of human disturbances provided there are enough resources available such as potential nesting and food trees in the habitat, according to a study.

Senior ranger and head of nature conservation section with the Tsirang forest division, Kinley’s study on ‘Nesting Habits and Breeding Season of Rufous-necked hornbill: A case from Tsirang Dzongkhag,’ was presented at the ecological symposium last week.

The Rufous-necked hornbill is classified as vulnerable under the International Union for Conservation of Nature.

He said that the availability of nesting and food trees determines the choice of habitat.

He said that looping of branches and collection of seed and fruits by nursery growers also pose a threat to the bird.

Other threats include clearing of forest for power transmission towers, road constructions, and natural threats such as competition for food and nest cavities, dying of nest trees, serpent eagle preying on them, healing of the tree trunk, and rotting and sinking of the nest cavity.

He recommended the retention of potential hornbill nesting and food trees from marking, carrying out intensive field investigation before issuing forestry clearances, incorporating hornbill conservation activities in the Community Forest (CF) management plan as most of the hornbills were sighted in CF areas, and initiating environmental education outreach programmes. “Local communities should be involved in monitoring and protection of food tree species, nest and roost sites. We have to also carry out nest management works.”

If the male hornbill comes from the other direction, he said the female would not take the food out of jealousy. “Rufous-necked hornbills are monogamous birds and they stay with only one life partner.”

Kinley said that at the later stage of nesting period, the male was observed feeding the female hornbill and the chicks three to five times a day.

He said that the nesting season starts from March 21 to July 19 with the mean breeding cycle of 120 days (115 to 125 days.) “From mid-July, I observed the chicks fledging out of the nest cavity which is quite early compared to India and Thailand.”

The limitations of the study, he said was that it is restricted to only one dzongkhag, and the less nest samples due to difficulty in locating the nest sites.