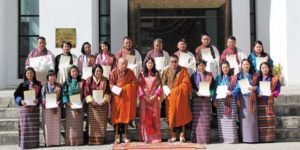 Tashi Yuden’s lungserma, which took her about a year to complete, bagged the first prize in Gho category during the 16th National Design and Art Competition (NDAC) at the Royal Textile Academy (RTA) in Thimphu yesterday.

The 44-year-old housewife has been weaving since she was 15. She said that creating new motifs has been difficult while weaving. “I won the second prize in Kira category in 2008.” She said she would participate again as it provides an opportunity for weavers and artists to continue working on creating new pieces.

The competition was organised in five different categories – gho (weaving), kira (weaving), embroidery, traditional painting and contemporary arts. It was held to promote unique arts and crafts by providing a platform to artisans.

Four weavers, three embroiderers, two master painters and a master sculptor were also awarded Royal patron’s meritorious awards. Cash prize of Nu 10,000 were awarded in recognition of the artisans’ contribution to the conservation of arts and crafts in the country.

The criteria included aspects of aesthetic in terms of originality, colour, creativity, shape and size, and technical application and skills in terms of surface decoration, details, skills, materials used, and market potential.

About 17 prize winning pieces would be exhibited at the RTA for a week.