What this rise to glory means

You are here: Home » Blog » News » What this rise to glory means 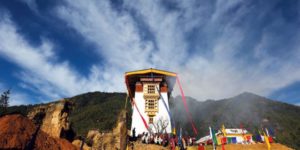 In what was yet another historic moment in the life of this nation, His Majesty The King on Sunday installed Sertog on the Utse of the Drukgyal Dzong, coinciding with the first birth anniversary of our beloved Gyalsey.

The reconstruction of Drukgyal Dzong began last year upon the command of His Majesty The King to mark the birth of the Prince of Destiny. In the run of one complete year, the progress we have made is nothing short of remarkable. The people of this generation now have an idea of what the original Fortress of Victory might have looked like in the days before a tragic fire razed the absolute grandeur of Bhutanese genius to the ground. We could only imagine the beauty of this monolith most exquisite through the narratives of foreign visitors and photographs that they had taken. English explorer John Claude White’s account of the dzong that he wrote for the National Geographic Magazine in 1914 gives us some idea of the dzong in the early days of the Bhutanese monarchy.

The rise of Drukgyal Dzong, therefore, has special significance to the narrative of this nation. It celebrates the nation’s dream to launch forward with pride and confidence. It marks the dawn of new era of hope. With the reconstruction of the Drukgyal Dzong, we celebrate the continuity of the singularly visionary and selfless leaders that have graced the fate of this bold nation and its people.

Come next year, we will have added many more structures to this dzong that was originally built to celebrate our victory over external forces. The completion of this project would mean not only the will of the nation to rise, but also its desire for ever greater peace and prosperity. In a way, we celebrate with the rise of the Drukgyal Dzong, the future of this forward-looking nation.