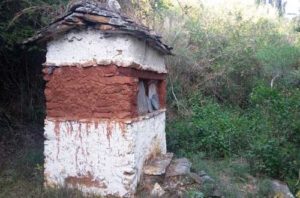 Culture: The last rays of the winter sun penetrate through thorny branches and touch a choeten that’s long been hidden under thick foliage.

Believed to have been built by Lam Drukpa Kunley in the 15th century, the choeten is today abandoned and forgotten. Grass grows on its roof and bushes have reclaimed its base. Its mud walls are falling apart.

The choeten was built in memory of Wola Gyalpo Tenzin from Wolathang village who attained a rainbow body (enlightenment) with the power of Drukpa Kunley’s blessings.

Locals say that the choeten contains Wola Gyalpo Tenzin’s clothes and his rosary as its inner relics (zung).

Surrounded by paddy fields, Wolathang village sits right in front of Chimmi Lhakhang. The noisy Toebi Rongchhu divides the holy temple and the village, and joins the turquoise-green Punatsangchhu.

According to the biography of Drukpa Kunley, Wola Gyalpo Tenzin encountered lam Drukpa Kuenley who was returning after subduing the demoness of Long Rong.

The lam was on the look out for his arrow shot from Yamdrok in Tibet that landed on the staircase of Toeb Tshewang’s house in Toeb Changdanang.

Wola Gyalpo Tenzin who had heard about the lam’s supernatural powers and asked the lam to give him dharma teachings that would help him in the after life.

Saying that Drukpa Kunley gave him a four-lined prayer of refuge containing sexual connotation. The lam asked Ap Tenzin to recite it whenever he remembered him.

Following the instruction, Ap Tenzin also requested a prayer that can strengthen his devotion and expedite his realisation. 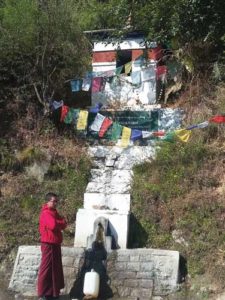 Accepting his plea, the lam provided another prayer, which was similar to the former one.

When Ap Tenzin returned home, his daughter asked whether he met Drukpa Kunley. He replied: “The lam gave me a refuge prayer, which I learned by heart.”

The daughter responded: “You are neither intelligent nor educated. How could you learn the prayer by heart?”

When Ap Tenzin said the prayers aloud his daughter ran out of the house in embarrassment. He did not stop until his wife interrupted.

Later, when the family gathered for their meal, Ap Tenzin closed his eyes, folded his hands and began to pray. When he opened his eyes he was alone. His children had fled because of embarrassment.

The wife warned him never to repeat the prayer but he responded that he would continue even at the cost of his life. Then his family chased him out of his house and put him in a hayloft near the house.

One evening, upon hearing a lute, piccolo and the voice of Ap Tenzin, the wife sent their daughter to check on the father thinking that he must be crying out of loneliness. When she came across just a heap of quilt she thought that her father was missing and when she removed the quilt she found a sphere of rainbow light with the syllable AH, the last letter in the Tibetan and dzongkha alphabet.

Drukpa Kunley’s biography says that when the family members and neighbours gathered there the letter AH flew into the sky, following which the voice of Ap Tenzin said: “Drukpa Kunley has sent me into the Potala Mountain Paradise. You prudish people must stay here. Give my clothes to the lam.”

Later, when lam Drukpa Kunley returned to the village the family members of Ap Tenzin offered the clothes to the lam who then built the choeten on the spot where Ap Tenzin attained a rainbow body and placed his clothes and rosary as the inner relics.

Except for a few elderly people, not many in Wolakha and nearby villages know about the choeten. “I have not seen the choeten,” said Kuenzang, 21, who followed in search of the choeten.

Kuenzang said that over the years the drupchu has been drying and becoming smaller. “I think its because people throw waste including sanitary pads nearby,” he said.

The sun sets behind the snow-capped mountains. Gradually, the silhouette of the choeten fades as thickets reclaim the old structure.