Yonphula airport to be ready by next month

You are here: Home » Blog » News » Yonphula airport to be ready by next month 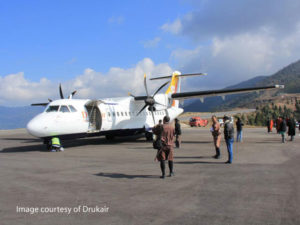 The domestic airport at Yonphula in Kanglung, Trashigang, will be completed by next month according to the Department of Air Transport (DAT).

The airport is expected to be operational from May provided the national airline Drukair choses to operate to the airport, said DAT director, Karma Wangchuk.

The airport was supposed to be completed by this month and operational by April. However, Karma Wangchuk said that the completion of the airport is not delayed and work is ongoing.

He said that the runway marking and the certification of the airport is expected to be completed midway through April. The severe weather conditions at Yonphula and electricity outages in Trashigang last week added to the delay. “Without electricity we couldn’t continue with the blacktopping of the runway.”

Once the airport is completed, Drukair is expected to resume its domestic flights to the east with three flights a week. Drukair CEO, Tandi Wangchuk, said that if all the works at the airport are completed, the airline can operate to Yonphula.

“However, Drukair is required to submit a proposal to the board on the commercial viability and any subsidy needed to operate the flights to Yonphula and Gelephu,” said Tandi Wangchuk. “The board then will decide and inform DHI (Druk Holdings and Investment) accordingly which will take up the issue with the government. Depending on understanding between DHI and government, Drukair will follow the directive.”

Tandi Wangchuk said if Yonphula becomes operational the airline will be able to extend operations to one more domestic airport and contribute to the economic development of the eastern part of the country.

Tandi Wangchuk also clarified that Drukair has not restarted flights to the Gelephu domestic airport as reflected in its advertisement published in Kuensel on February 16.

Tandi Wangchuk said that the operations can only start after understanding between DHI and the government.

Yonphula airport, which was supposed to be completed by October last year, was delayed because of harsh weather conditions. However, no additional cost was incurred during the delay according to Karma Wangchuk.

Yonphula airport was closed in 2013 for renovation, improvement of safety and compliance with international standards. One of the major changes being carried out is the realignment of one half of the runway.

Another major change is flattening and resurfacing the runway. The slope of the runway, which was 3.8 percent, has been brought down to below two percent, which is acceptable by international standards.

The changes to Yonphula airport is being funded by ADB under the Air Transport Connectivity Enhancement project. A total of USD 6.9 million has been provided to improve all three domestic airports.

Meanwhile, DAT is also planning to construct a new terminal at the Bumthang domestic airport. Karma Wangchuk said that since the current terminal doesn’t meet the required standard, a new terminal will be established.

The tender for the new terminal will soon be floated.